The Betrayal of the Duchess: The Scandal That Unmade the Bourbon Monarchy and Made France Modern (Hardcover) 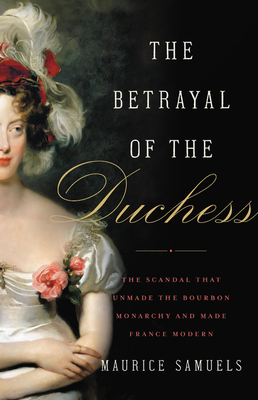 By Maurice Samuels
$32.00
Email or call for price.

Fighting to reclaim the French crown for the Bourbons, the duchesse de Berry faces betrayal at the hands of one of her closest advisors in this dramatic history of power and revolution.

The year was 1832, a cholera pandemic raged, and the French royal family was in exile, driven out by yet another revolution. From a drafty Scottish castle, the duchesse de Berry -- the mother of the eleven-year-old heir to the throne -- hatched a plot to restore the Bourbon dynasty. For months, she commanded a guerilla army and evaded capture by disguising herself as a man. But soon she was betrayed by her trusted advisor, Simon Deutz, the son of France's Chief Rabbi. The betrayal became a cause célèbre for Bourbon loyalists and ignited a firestorm of hate against France's Jews. By blaming an entire people for the actions of a single man, the duchess's supporters set the terms for the century of antisemitism that followed.
Brimming with intrigue and lush detail, The Betrayal of the Duchess is the riveting story of a high-spirited woman, the charming but volatile young man who double-crossed her, and the birth of one of the modern world's most deadly forms of hatred.

Maurice Samuels is the Betty Jane Anlyan professor of French at Yale University, chair of the program in Judaic studies, and founder and director of the Yale Program for the Study of Antisemitism. He is the author of three books, including The Spectacular Past, which won the Gaddis Smith International Book Prize, and Inventing the Israelite, which received the MLA's Scaglione Prize. Prior to teaching at Yale, he was a professor at the University of Pennsylvania after completing his PhD at Harvard. He received a Guggenheim Fellowship in 2015. He lives in New York and New Haven, Connecticut.

"The Duchess of Berry's story is enthralling, and Mr. Samuels tells it well. His epigraph is taken from the Memoirs of the Comtesse de Boigne: 'A new Walter Scott will have a difficult time finding a more poetic subject than the expedition of Madame la duchesse de Berry.' Absolutely."—Wall Street Journal

"A suspenseful, entertaining narrative that provides
vivid portraits of its two subjects.... Samuels
has stripped away the pious propaganda, uncovered many new details, and told
the story in a gripping fashion that also brings out its absurdities and
moments of dark comedy."—New York Review of Books

"Maurice Samuels's account of the improbable and riveting story of the duchess de Berry is both deeply researched and elegantly written. But this triumphant work provides much more than a narrative of civil war and treachery; it also interweaves dazzling insight into deeply relevant issues including the genesis of French (and European) antisemitism."—Andrew S. Curran, author of Diderot and the Art of Thinking Freely

"The duchesse de Berry raises an army to restore the Bourbon monarchy. Her advisor, a charming Jewish convert named Simon Deutz, sells her out to the government, and her plot fails. A flood of literature follows -- from Hugo, Chateaubriand, Dumas. And then, mysteriously, the Deutz affair disappears from modern memory. It took someone with Maurice Samuels's psychological and political insights, his astonishing research, and his gift for story telling, to bring to life the true origin story of modern anti-Semitism, sixty years before the Dreyfus affair. A thriller, a non-fiction novel of palace intrigue, full of outrageous characters and theatrical scenes, Samuels's The Betrayal of the Duchess speaks of passions and prejudices uncannily suited to our own times."—Alice Kaplan, author of Looking for The Stranger and Dreaming in French and the John M. Musser Professor of French, Yale University

"This timely history -- impeccably researched and engagingly told -- relates the failed royalist coup of the Bourbon princess Caroline, duchesse de Berry. Highlighting the involvement of her Jewish-turned-Catholic co-conspirator, Simon Deutz, Maurice Samuels shows how this episode crystallized an ideology of antisemitism that has pervaded French society, with disastrous results, ever since."—Caroline Weber, author of Proust's Duchess and Queen of Fashion

"With a knack for narration and deep knowledge of the times, Maurice Samuels excavates a scandal of lost causes and the new hatreds that grow in their place. It is at once a gripping account of individuals, a portrait of an age, and a history that speaks to us, hauntingly, in our own troubled present."—Darrin M. McMahon, author Divine Fury and Mary Brinsmead Wheelock Professor of History, Dartmouth College

"A colorful history of the duchesse de Berry's failed attempt to restore the Bourbon dynasty to the French throne... Samuels delivers a spirited and comprehensive account of this lesser-known drama and draws insightful parallels to anti-Semitism within modern-day reactionary movements. Armchair historians will be delighted."—Publishers Weekly

"The Betrayal of the Duchess is excellent in every respect... [Samuels] is a talented storyteller, one who eschews the too-often heavy prose of academics writing for and to themselves...Samuels has also brushed off the dust on his two principal characters and made them memorable."—Antisemitism Studies