The Art of The Batman (Hardcover) 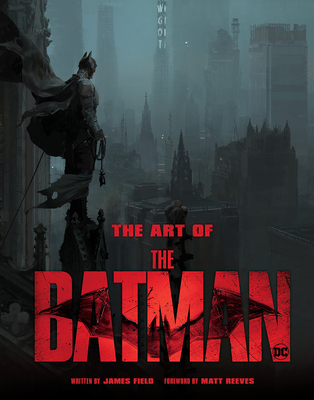 THE ART OF THE BATMAN is the official behind-the-scenes illustrated tie-in book to the highly anticipated film The Batman by Matt Reeves (Cloverfield, Dawn of the Planet of the Apes, War for the Planet of the Apes), coming to theaters March 4, 2022. The Batman stars Robert Pattinson as Bruce Wayne/The Batman, Zoë Kravitz as Selina Kyle/Catwoman, Paul Dano as Edward Nashton/ The Riddler, Colin Farrell as Oswald Cobblepot/The Penguin, Jeffrey Wright as Lieutenant James Gordon, Andy Serkis as Alfred Pennyworth, and John Turturro as Carmine Falcone.

Two years of stalking the streets as The Batman, striking fear into the hearts of criminals, has led Bruce Wayne deep into the shadows of Gotham City. As the evidence surrounding a series of crimes begins to lead closer to home and the scale of the perpetrator’s plans becomes clear, Batman must forge new relationships, unmask the culprit, and bring justice to the abuse of power and corruption that has long plagued Gotham City.

Readers will get an insider’s look at the design and production process for The Batman, including insightful interviews with the filmmaking team and cast; never-before-seen conceptual paintings and set photos exploring this new version of Gotham City; shot-by-shot comparisons between the film and storyboards; and a closer look at the designs for the costumes, vehicles, gadgets, riddles, and more.

James Field has worked in the film industry since 2006. The International Winner of the Nickelodeon Writing Program 2016/17, Field has since divided his time between marketing and writing for film, television, and audio. He worked as Production Liaison for both The Batman and The Flash. He lives in the UK with his partner and children.