Holding the Line: Inside the Nation's Preeminent US Attorney's Office and Its Battle with the Trump Justice Department (Hardcover) 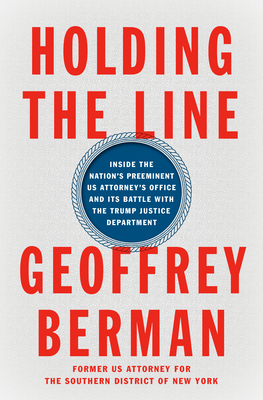 "Throughout my tenure as US attorney, Trump's Justice Department kept demanding that I use my office to aid them politically, and I kept declining - in ways just tactful enough to keep me from being fired. I walked this tightrope for two and a half years. Eventually, the rope snapped." - from Holding the Line

"A cautionary tale about how political forces can undermine the quest for justice." - Barbara McQuade, The Washington Post

The gripping and explosive memoir of serving as US Attorney for the Southern District of New York, in the face of the Justice Department’s attempts to protect Trump’s friends and punish his enemies.

Ascending to the leadership role of US Attorney for the Southern District, which includes Manhattan and several counties to the north, is a capstone to any legal career: it entails guiding a team of the best lawyers in America in selecting and winning cases that often have global import. Geoffrey Berman was honored to be tapped for the job by Donald Trump in 2018. The manner in which Trump had dispatched his predecessor Preet Bharara was troubling, but the institution was fabled for its independence. Surely he could manage.

So began one of the most tumultuous two-and-a-half-year stretches in the over two-hundred-thirty year history of the office. Almost immediately, Berman found himself pushing back against the Trump Justice Department’s blatant efforts to bring weak cases against political foes and squash worthy cases that threatened to tarnish allies and Trump himself. When Bill Barr became attorney general, Berman hoped and believed things would get better, but instead they got much worse. The heart of Holding the Line is his never-before-told account of the lengths Barr went to in corrupting the independence of the office, and the lengths Berman had to go in preserving it. Finally, Trump and Barr, fed up with Berman’s principles, summarily fired him, though he refused to go quietly and prevented Barr from installing someone who might be more compliant. Berman’s determined defense of the values of prosecutorial independence, without fear or favor, made him a hero to everyone who shares those values.

Holding the Line also relates the remarkable casework of the Southern District in Berman’s time there, including taking down notorious sex traffickers Jeffrey Epstein and Lawrence Ray, Big Pharma executives, and vicious criminal syndicates, and repatriating Nazi-looted art. Riveting in themselves, these stories showcase the esprit de corps that makes the Southern District so special, and the stakes Berman felt in protecting its integrity against all foes, up to and including the US attorney general and the president of the United States.

Geoffrey Berman is the former US Attorney for the Southern District of New York. In that role, he was responsible for some of the nation’s most important prosecutions, including terrorism and sanctions cases, securities and commodities fraud, public corruption, cybercrime, money laundering, sex trafficking, narcotics, gang violence, and civil rights violations. He previously served as an Assistant US Attorney in the Southern District of New York and as Associate Counsel in the Office of Independent Counsel (Iran-Contra). Following his tenure as US Attorney, Mr. Berman was a visiting professor at Stanford Law School. In December 2020, Mr. Berman joined the law firm of Fried Frank, where he is a litigation partner and head of its white-collar defense practice.

"A cautionary tale about how political forces can undermine the quest for justice." —Barbara McQuade, The Washington Post

"A terrifying book...The Justice Department needs to contend with Berman’s record of what happened to him in a much more serious way than they have, because that happened inside the Justice Department in a way that should never happen again and is likely to happen again now that we know that Trump was able to get away with it with no consequences." —Rachel Maddow, The Ezra Klein Show

“With the storytelling skills of a trial lawyer . . . Berman’s book provides a cautionary tale about how political forces can undermine the quest for justice.” —The Washington Post

“A memoir whose every page touches still-fresh headlines…This book stands not just as a compelling look at how justice works, but also as a fine specimen of sweet revenge. An instructive, highly readable account of the law, its protectors, and its enemies.” —Kirkus Reviews

“Smart and crisp . . . Think of Berman as the honey badger–if the honey badger headed up a white-collar practice at a Wall Street law firm. He doesn’t give a fig. He holds the receipts . . . From the looks of things, Geoffrey Berman is having the last laugh.” —The Guardian

"If Mr. Berman’s account is true, he and others in the department deserve praise for refusing to bow to political pressure. But more important is determining whether there are vulnerabilities in the Justice Department’s structure and procedures that need to be patched...The warning he sounds — about the fragility of justice and the danger that a second Trump presidency might pose — must not go unnoticed." —The Washington Post