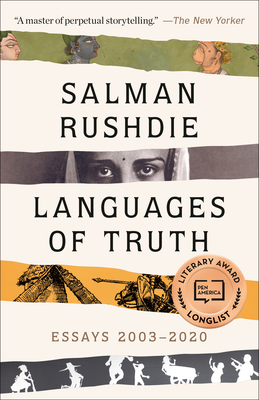 Salman Rushdie is celebrated as “a master of perpetual storytelling” (The New Yorker), illuminating truths about our society and culture through his gorgeous, often searing prose. Now, in his latest collection of nonfiction, he brings together insightful and inspiring essays, criticism, and speeches that focus on his relationship with the written word and solidify his place as one of the most original thinkers of our time.

Gathering pieces written between 2003 and 2020, Languages of Truth chronicles Rushdie’s intellectual engagement with a period of momentous cultural shifts. Immersing the reader in a wide variety of subjects, he delves into the nature of storytelling as a human need, and what emerges is, in myriad ways, a love letter to literature itself. Rushdie explores what the work of authors from Shakespeare and Cervantes to Samuel Beckett, Eudora Welty, and Toni Morrison mean to him, whether on the page or in person. He delves deep into the nature of “truth,” revels in the vibrant malleability of language and the creative lines that can join art and life, and looks anew at migration, multiculturalism, and censorship.

Enlivened on every page by Rushdie’s signature wit and dazzling voice, Languages of Truth offers the author’s most piercingly analytical views yet on the evolution of literature and culture even as he takes us on an exhilarating tour of his own exuberant and fearless imagination.

Salman Rushdie is the author of fourteen previous novels, including Midnight’s Children (for which he won the Booker Prize and the Best of the Booker), Shame, The Satanic Verses, The Moor’s Last Sigh, and Quichotte, all of which have been shortlisted for the Booker Prize; a collection of stories, East, West; a memoir, Joseph Anton; a work of reportage, The Jaguar Smile; and three collections of essays, most recently Languages of Truth. His many awards include the Whitbread Prize for Best Novel, which he won twice; the PEN/Allen Foundation Literary Service Award; the National Arts Award; the French Prix du Meilleur Livre Étranger; the European Union’s Aristeion Prize for Literature; the Budapest Grand Prize for Literature; and the Italian Premio Grinzane Cavour. He is a member of the American Academy of Arts and Letters and a fellow of the American Academy of Arts and Sciences, and he is a Distinguished Writer in Residence at New York University. He is a former president of PEN America. His books have been translated into over forty languages.

Praise for Languages of Truth

“Mesmerizing . . . Rushdie’s writing is erudite and full of sympathy, brimming with insight and wit: ‘Literature has never lost sight of what our quarrelsome world is trying to force us to forget. Literature rejoices in contradiction.’ Rushdie’s fans will be delighted.”—Publishers Weekly (starred review)

“Wide-ranging nonfiction pieces by the distinguished novelist, unified by his commitment to artistic freedom and his adamant opposition to censorship in any form. . . . This collection . . . showcases his generous spirit, dedicated to illuminating the work of fellow artists and defending their right to unfettered creativity. . . . Engagingly passionate, and endlessly informative: a literary treat.”—Kirkus Reviews (starred review)

“He is a legend. . . . His is not only an enviable talent, it’s a revelatory mind [displaying] a profound knowledge of history, culture, human frailty, and triumph.”—Toni Morrison

“One of the greatest writers of our age . . . a giant of literature.”—Neil Gaiman

“Rushdie is our Scheherazade.”—Ursula K. Le Guin, The Guardian

“A master of metamorphosis—transforming life, art and language in the subterranean maze of his imagination.”—Don DeLillo