City of Secrets: A Novel (Paperback) 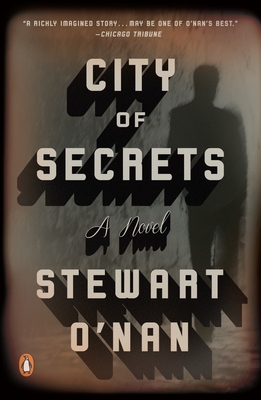 “Stewart O’Nan’s City of Secrets will keep you up all night reading – what a beautifully crafted novel.” – Alan Furst, New York Times bestselling author of Mission to Paris

From master storyteller Stewart O'Nan, author of Henry, Himself and Emily, Alone, a timely moral thriller of the Jewish underground resistance in Jerusalem after the Second World War

In 1945, with no homes to return to, Jewish refugees by the tens of thousands set out for Palestine. Those who made it were hunted as illegals by the British mandatory authorities there and relied on the underground to shelter them; taking fake names, they blended with the population, joining the wildly different factions fighting for the independence of Israel. From master storyteller Stewart O'Nan, author of Emily, Alone and Henry, Himself, City of Secrets follows one survivor, Brand, as he tries to regain himself after losing everyone he's ever loved. Now driving a taxi provided—like his new identity—by the underground, he navigates the twisting streets of Jerusalem as well as the overlapping, sometimes deadly loyalties of the resistance. Alone, haunted by memories, he tries to become again the man he was before the war—honest, strong, capable of moral choice. He falls in love with Eva, a fellow survivor and member of his cell, reclaims his faith, and commits himself to the revolution, accepting secret missions that grow more and more dangerous even as he begins to suspect he's being used by their cell's dashing leader, Asher. By the time Brand understands the truth, it's too late, and the tragedy that ensues changes history. A noirish, deeply felt novel of intrigue and identity written in O'Nan's trademark lucent style, City of Secrets asks how both despair and faith can lead us astray, and what happens when, with the noblest intentions, we join movements beyond our control.

Stewart O'Nan is the author of fifteen previous novels, including West of Sunset, The Odds, Emily Alone, Songs for the Missing, Last Night at the Lobster, A Prayer for the Dying, and Snow Angels. His 2007 novel, Last Night at the Lobster, was a national bestseller and a finalist for the Los Angeles Times Book Prize. He was born and raised in Pittsburgh, where he lives with his family.

“Excellent . . .a little jewel, wonderfully sparse, moody and uneasy, reminiscent of the delicious, frayed-collar noir of le Carré’s The Spy Who Came in From the Cold. . .You can smell the squally desert wind that bends the cypress trees on the Jerusalem hills but never brings the rain. City of Secrets makes for great summer reading.”
– Jason Matthews, The New York Times Book Review

“Post-World War II Jerusalem is the provocative setting for Stewart O’Nan’s atmospheric thriller. . .a richly-imagined story. . .may be one of O’Nan’s best.  Its strength lies in his ability, as always, to take us inside the minds and souls of characters, real or imagined.”
—The Chicago Tribune

“Masterful. . .its impact is deceptively large because O’Nan has something that can’t be taught to a writer – and can indeed by unlearned by talented writers:  the gift of authenticity.”
—The Washington Post

“A fine piece of storytelling. . .a work in the exotic historic mode of Graham Greene, with the drier and grittier tone of Raymond Chandler. . .the moral struggle in City of Secrets is timeless and international.”
—The Boston Globe

“Enthralling. . .O’Nan takes a clear-eyed and unsentimental look at an astonishing slice of history – one that is strikingly echoed by the heartbreaking events still unfolding in the Middle East.”
—The Seattle Times

“A fast-moving story that brings fresh perspective to a moment of historical significance . . . O’Nan’s storytelling, once again, demonstrates why he has earned a place among our most illustrious writers.”
—St. Louis Post Dispatch

“A search for love and justice after the Holocaust. . . I’ll not soon forget Brand and his quest for something worth believing in. . . worth applauding, too, is Mr. O’Nan’s ability to realize a complex female character in Eva.”
—Pittsburgh Post-Gazette

“Stewart O’Nan’s City of Secrets will keep you up all night reading – what a beautifully crafted novel.”
– Alan Furst, New York Times bestselling author of Mission to Paris

“Finely wrought and morally complex, O'Nan's considerable story-telling powers are masterfully deployed here.  With deft strokes, he evokes the tensions and tragedies of Mandate Jerusalem, riven then as now by the fault lines of community and conscience.”
– Geraldine Brooks, author of The Secret Chord

“I've been a Stewart O'Nan fan since his very first novel, and never more so than with his latest. In City of Secrets, O'Nan takes his mastery of language and depth of character in a fresh direction: a richly nuanced suspense novel, set in an immensely intriguing post-war Jerusalem. A remarkable book."
– Chris Pavone, author of The Expats

“Imaginative and nimble, O’Nan is a master of narrative distillation, and in his latest taut novel, set in British-ruled Jerusalem immediately after WWII, he achieves thriller-like suspense. . .[an] engrossing portrait of an innocent caught in the web of history.”
– ALA Booklist (starred)

“A Conradian espionage thriller leavened with existential introspection. . .O’Nan’s novel works on several levels, but it is especially memorable as a story where the tortured emotions of its characters are indistinguishable from the turmoil of the chaotic events that overwhelm them.”
– Publishers Weekly